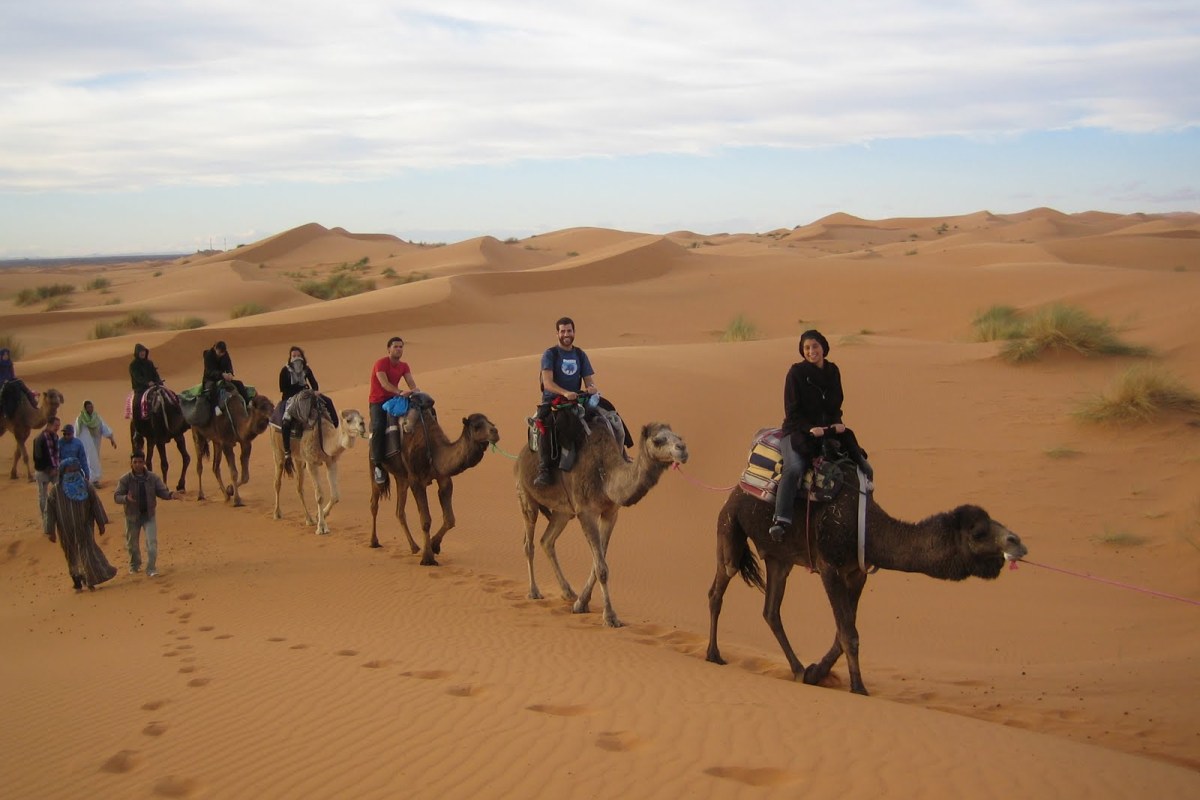 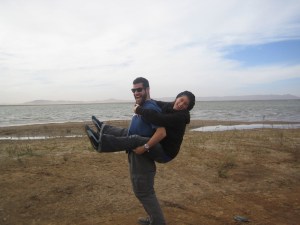 One of the perks to living in an Islamic city is that there is no need for an alarm clock. The frightening sound of the Muezzin calling for early prayer from the smokestack minarets pierces into any dream no matter how wonderful. On this morning, the call was welcoming because we needed to meet Abdul, our Berber guide for a drive to the desert. Missy and I piled into the Mercedes grand taxi, while Melody and Kristof chased after us in the car that they had rented.
We drove through the snowless ski mountains of Ifrane and forded a 50 meter meter flooded part of the road going through the Rif mountains, Oregon trail style. Then we stopped in a small one street town in the countryside while Abdul and the driver stopped to pray leaving the four of us to wait disgustedly in front of a restaraunt where full goat carcasses hung right next to the grill. Since it was Friday, the “Muslim Sabbath,” the prayer session took like an hour longer (more than the promised 10 minutes). As we waited, to entertain ourselves, I made friends with a local restaraunt owner who let me sample the face and brain from a pot of boiling goat heads. 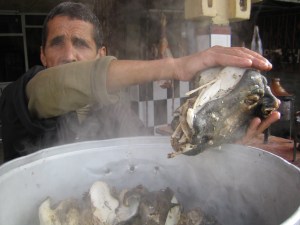 We then took off through the cedar forrests of the Middle Atlas mountains and then after through the Ziz Valley, where the milenia of running river beds dragged a rake across the snaking canyon faces. We arrived at the Auberge (hotel) in the pitch dark and were greated with Tajine and beer by a hashish smoking guide of another group of Brazilians who accompanied us on our travels.

The next morning, we woke up and walked around the compound that we could not realy see the night before due to darkness. Missy and I walked outside the gate for a second and we started jumping up and down in excitement because of the scene that was presented to us- an endless rolling sea of yellow-orange Saharan sand with dunes piled ontop of each other in a shoving match. I ran to the first dune I saw, throwing sand like confetti that was taken by the desert wind to a nearby camel (dromadaire to be precise) who was standing pensively looking at me, an ameuture who is used to regular rainfall preventing soil from becoming sand.

That day we piled into a 4×4 and drove through the “Black Desert” to see a Berber tribe play Gnawa music, then to a lake with flamingos and then returned to our Auberge for the camel (dromadair) excursion. It took an hour to caravan to the touristy tenting area in the desert and as we arrived the sun was setting. The group wanted to climb a steep mountain dune 1000 feet high to see the sun fall off into the horizon. Our eyes were certainly bigger than our muscles as climbing that beast, through the deep sand and took an immense amount of energy, but seeing the entire desert change into a glowing neon tangerine hue and the sun become a melting grapefruit was all worth it. 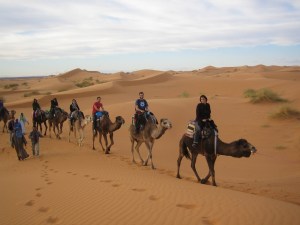 Missy and I shivered ourselves to sleep that night and woke up early to catch the sun rise, animating the desert. Tragedy took place as three minutes before the crest of the sun appeared, the camera decided to break from all the sand clogging the parts. 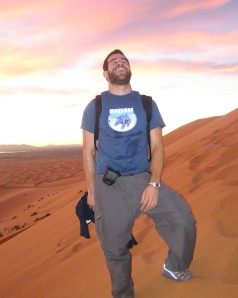 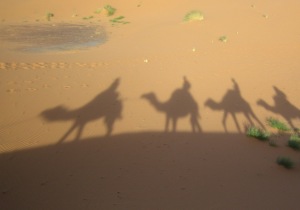 -Transport from Fes to Erfoud can be accomplished by bus. ONCF, the most reputable line at the time of our trip had one that traveled overnight. This will make you miss the beautiful scenery of the Middle Atlas mountains and Ziz valley on the 8 hour ride. We found a price of the grand taxi of 2000 dh ($250). Abdul, our guide charged us 3000 dh ($380) for Missy and I for a ride, one night in the Auberge, meals, travel around Merzouga for the day to see sites and one night camel excursion.

-A better way to go to the desert we found out is through Marrakesh. There are more trip outfitters and with more competition, lower prices. Although in our experience we were able to avoid acting like typical tourists and learn much more about Moroccans by interacting with Abdul, we could have avoided using such a shady guide.

-You should not enter Merzouga without a guide. They will circle you like vultures upon arriving and supposedly can take advantage of you such as initially charging 50 euros and then at the end claiming they charged 200 euros and there is no regulation down there.

-To travel from Merzouga to Marrakesh, you need to find a ride to Tinehir (I believe) and there you can find several buses that can take you to Marrakesh. This is a long and miserable ride and you will drive through the High Atlas Mountains at night arriving very late to the ochre city. A better way is to spend the night in Ourzazatte (try to check out Aiit Ben Haddou nearby!!!) and enter Marrakesh the next day.

-Dress warm for the nights- especially in the winter- because it is quite cold int he desert.

-Take care of your toilet needs before you leave if you can because there is only a Berber toilet in the desert (sand) with little trees to hide your business.