I first put on skis when I was seven years old. My mom took me to a local Connecticut hill and since then it has been a persistent passion in my life. Learning how to ski on resorts, I progressed from mastering blues, diamonds and then in my teenage years double diamonds. Later I learned of the joy of tree skiing, first in Vermont and then in Colorado and then for more adventure with lift access hike-to terrain. Every year I find a desire to push myself and this has lead me to pursue the next logical conclusion in taking up a back-country ski mountaineering trip.

Life as a Philadelphia physician does not afford the time to put in fifty ski days a year. I am usually limited to one or two trips per winter. But I do my best to work with what I am given and have learned that you can extend the ski season until the spring if you search in the right places.

Last year, I skied Tuckerman’s Ravine, below the peak of Mount Washington in New Hampshire, at the end of April. This year I took my exploration of spring ski mountaineering West and set out to tackle Mount Shasta.

Mount Shasta is a a 14,180 foot active, glaciated volcano in the southern Cascade mountain range in Northern California. It holds the reputation as being one of the ultimate ski mountaineering destinations.

I flew to Sacramento, rented a car, a drove up interstate 5. The first 60 minutes of the drive  is a boring rural flat landscape until Shasta pierces the horizon and comes clearer and clearer view for the drive.

2 hours from my destination

In Shasta, I stayed in a motel. The downtown was lonely and quiet and I was surprised to find everything closed by 6pm on a Friday night. It seemed that every other store sold crystals and other spiritual amulets. Dreadlocks grew freely from the heads of the townspeople like corn waving in the breeze in Iowa. There was certainly a strong vibe in the area.

On the day of preparing my car for the trek, I was parked next to a retired couple from Oklahoma. Friendly yes, the wife had a big smile on her face, as she wore a 1995 pink track suite and an Amish style hair bun, but I was trying to get my mind right and focused for the adventure. We talked for some minutes as I tried my hardest to be polite. At the end of the conversation she wished me best of luck and that she hoped I would run into the inter-dimensional beings. I looked at her confused. “Oh you didn’t know?” she explained, “the legends say a super human race lives in the center of the mountain of Shasta and spiritual seekers pilgrimage here year round as we try to learn how to live in harmony with them.”

I had signed up to for a three day, two night ski trip with Shasta Mountain Guides. The small group consisted of myself with two other clients and two guides. We had very personal service and we were a tight group and we were prepared to communicate with any mountain spirits if needed (unless they were white walkers).

We left the parking lot near Bunny Flat Trailhead (6940′)and with skis on our boots, we skinned up the tracks to establish our tent near Horse camp (7,900′). As a beginner into randonee skiing or ski touring, I had to learn quickly about walking with my heal released from the bindings like a cross country skier and use “skins” which is a friction surface at the base which enables me to walk up the mountain on skis.

It was actually quite easy. After establishing our base camp at 8000 feet elevation, we then would skin up to various

portions of the mountain and then lock in our heals and alpine ski down in the soft warmed up corn snow. Turns just feel like you are spreading butter on a fresh baked bread.

Ski mountaineering is a challenge of terrain and weather. The snow is at the mercy of the course of the sun. It is icy and unforgiving at night and in cold cloud cover, then when baking in the blue skies the surface softens and promises pristine turns. The extremes of temperatures change in the matter of minutes. At one moment a gust of wind will blow clouds through and induce us to bundle up up to our ski parka, and in a short while, it will clear out and heat up forcing all mountaineers to shed layers quickly or fog your glacier glasses and soak your shirt from sweat (which will later on freeze when it gets cold again).

Self management is the key principle to enjoying mountaineering. That and physical fitness. At high elevation, you need to breathe right, eat thousands of calories and stay hydrated.

Hiking consists typically of 60 minutes of steady climbing followed by a short ten minute “rest” which is anything but relaxing. In the ten minutes you need to add jacket layers because it gets cold quick when you’re not moving and then force feed yourself a descent snack, drink at least 1/3-1/2 Liter of water, reapply sunscreen and make any equipment adjustments for the next 60 minute push.

We simulated this pace for the two warm up days as we took it easy skiing the lower slopes by day and slept through the 50 – 70 mph gusting wind in our tents at night. Our first night it dropped to a frigid -5 degrees F causing me to shiver in all my layers of clothes I brought with me. That night sucked.

Summit night fortunately was not so oppressive. It was a pleasant 20 degrees when we embarked for the summit at 3am. We skinned as far as we could until the slope became too steep. Then, we attached the skis to our bags and we walked up the mountain roped together with crampons and ice axe. 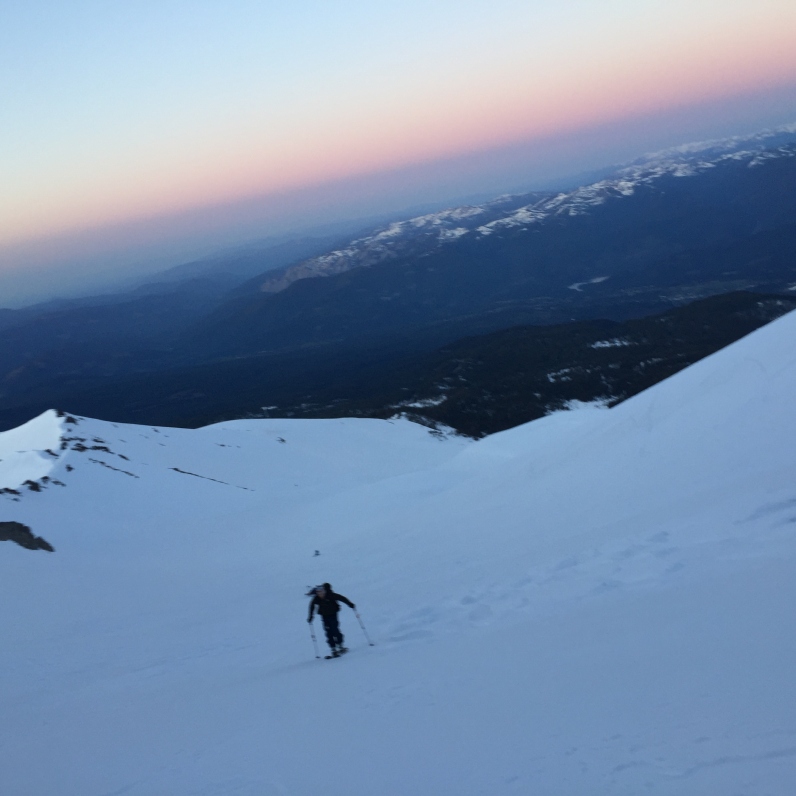 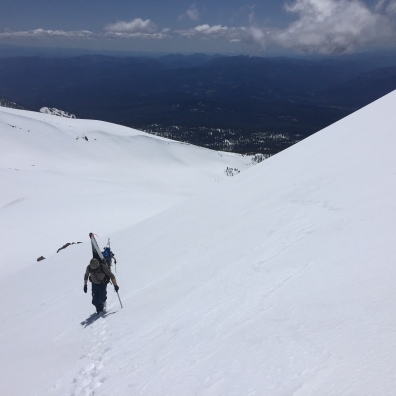 I felt we had perfect conditions. We were moving at a descent pace and were approaching the summit, until, 1000 feet from the top, the winds picked up. Roped together one of my co-clients kept slipping in the wind and we were preparing to self arrest to prevent a treacherous fall and slide down the face of Avalanche gulche.

We all moved quickly for cover under a boulder near a ridge but this provided us with little shelter. Unfortunately, this was the end of the line for us. It was determined too dangerous to continue when it was too difficult to hear each other shout at each other from 10 feet away.

We replaced our crampons with skis and proceed with down the icy scree on a power turn of shame.

My disappointment was fleeting. I was intently focused on not falling, because loosing my edge with any bit of speed will lead to a long painful slide down a 40 degree 2000 foot slope. My guide admitted it was one of the worst conditions he had ever experienced in 69 summit attempts.

It was a total shock to experience such extreme, windy, treacherous conditions in rapid moving cloud cover at 13,000 feet because at 10,000  feet, it was a spring skiing wonderland. Thigh burning razor sharp turns on crust, turned into ballet carving on the soft corn snow at the lower elevation.

Shasta does not go as one for the books as a summit, and I failed the Oklahoma couple and could not find the inter-dimensional beings.

Shasta from Bunny flats on day 1 (a summitable day) 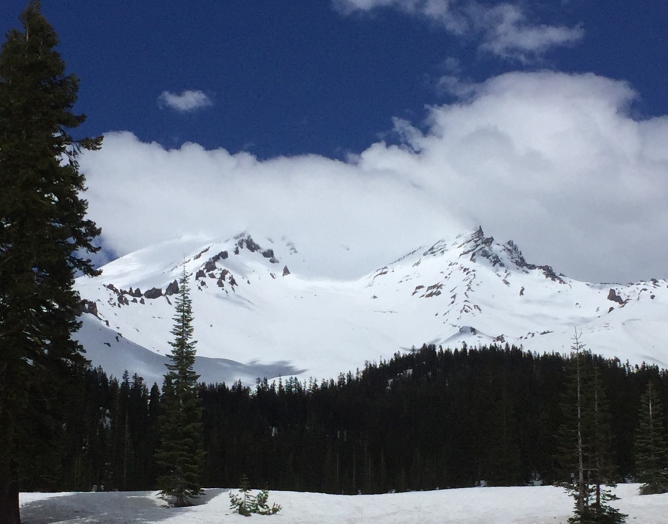 I visited my brother January, 2016 who lives and works in Keystone Colorado. On our Vail ski day, we dabbled in a little backcountry skiing. We passed through the gaits to hunt for the freshest snow on the mountain.

What we found was a band of cliffs with no easy route of escape. I peered over the edge of a twenty foot drop and looked at my brother. We started discussing whether we should take our skis off and walk the other way.

All of a sudden, a lone skier came near us. He wore dreadlocks and smelled like weed and we hoped he knew the safest way down. Well, it turns out he did. “Just go off the cliff bro.”

He saw the fear in both of our faces.

“When my father took me when I was younger, he would say, throw off your skis, take a running start, jump and when you land on your back there will be nothing to worry about.”

For some reason it seemed like the right piece of advise I needed. I didn’t throw off my skis, but I backed up, thrusted forward to the cliff and jumped.

I did not come close to landing, but it was the softest wipe-out I could ever imagine.

Here are some other photos from the ski trip: 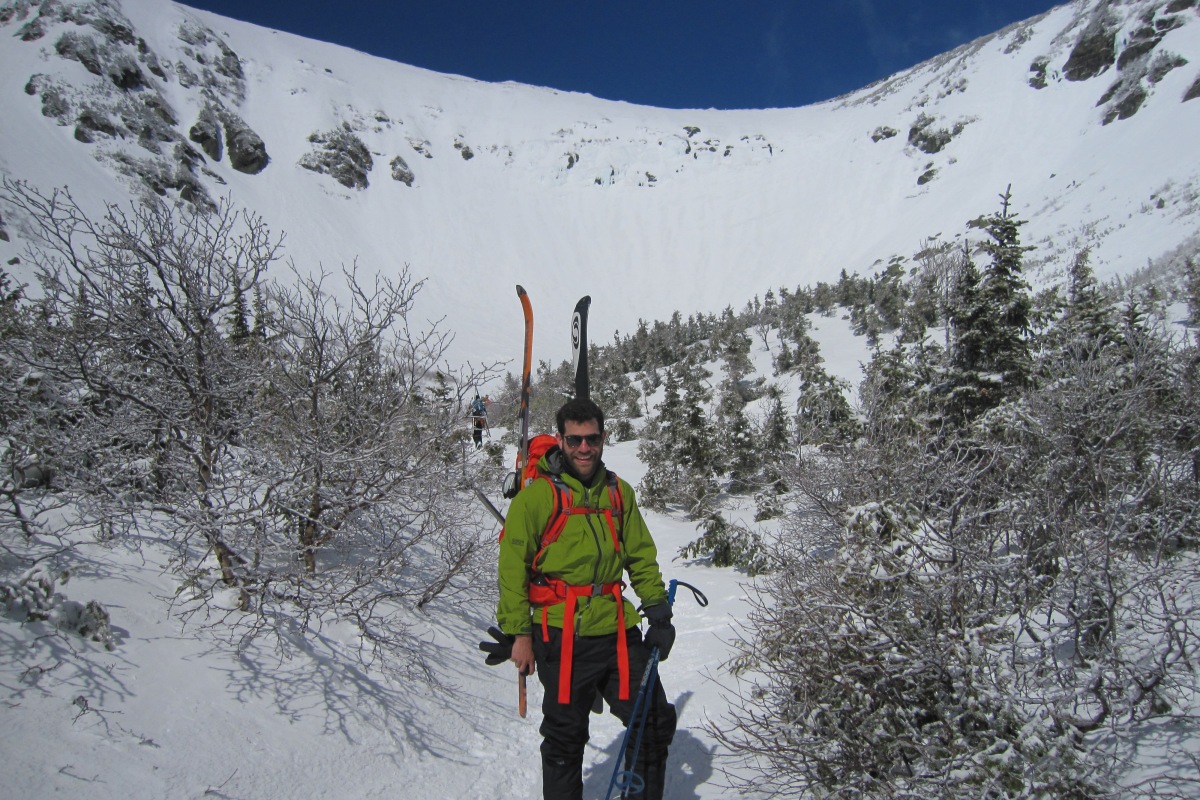 To help get in shape for my Mt. Ranier climb, I traveled on my weekend off to the Presidential Range in April to test out my newly purchased ice axe and crampons. Tuckerman’s is a classic East coast ski experience that I had never tried before. It is an easy-to-hike to ravine, several hundred feet bellow the highest summit in New Hampshire, Mt. Washington (6,289′).

Mt. Washington is home to the strongest winds in the United States ever recorded outside of a cyclone  (231mph). Storms at the summit can be wicked, but in the spring with beautiful weather, Tuckerman’s is a spring-skiing party.

On these perfect days, you will not find solitude on this mountain.

I booked on up there in 8.5 hours from Philadelphia (I dropped my daughter Ella off at my parent’s house in CT). After sleeping in the car, I hiked to the top of the ravine, skied down and back to the car. Hike- 4 hours, Ski 45 minutes. The drive home after picking up Ella, was 9.5 hours thanks to traffic. I got to bed for much needed rest before the 24-hour call-shift scheduled for the next day.

In the life of an anesthesiologist, ski enthusiast and masochist, sometimes you have to do what it takes to squeeze adventure into life.